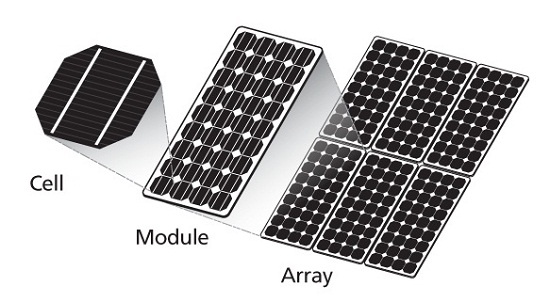 What is Solar Panel? A solar cell panel, solar electric panel, photo-voltaic (PV) module or just solar panel is an assembly of photo-voltaic cells mounted in a framework for installation.

Solar panels use sunlight as a source of energy to generate direct current electricity. A collection of PV modules is called a PV panel, and a system of PV panels is called an array. Arrays of a photovoltaic system supply solar electricity to electrical equipment.

Who invented the solar panel?

In 1881, Charles Fritts created the first commercial solar panel, which was reported by Fritts as “continuous, constant and of considerable force not only by exposure to sunlight but also to dim, diffused daylight.

In 1839, the ability of some materials to create an electrical charge from light exposure was first observed by Alexandre-Edmond Becquerel.

Though these initial solar panels were too inefficient for even simple electric devices they were used as an instrument to measure light.

The observation by Becquerel was not replicated again until 1873, when Willoughby Smith discovered that the charge could be caused by light hitting selenium.

After this discovery, William Grylls Adams and Richard Evans Day published “The action of light on selenium” in 1876, describing the experiment they used to replicate Smith’s results.

However, these solar panels were very inefficient, especially compared to coal-fired power plants.

Who and When created the solar cell design?

In 1939, Russell Ohl created the solar cell design that is used in many modern solar panels. He patented his design in 1941.

In 1954, this design was first used by Bell Labs to create the first commercially viable silicon solar cell.

The surface passivation process has since been critical to solar cell efficiency.

What is solar panel theory?

The general solar panel theory or photovoltaic modules use light energy (photons) from the Sun to generate electricity through the photovoltaic effect. Most modules use wafer-based crystalline silicon cells or thin-film cells.

What is solar panel construction principles?

The photovoltaic cells are usually connected electrically in series, one to another to the desired voltage, and then in parallel to increase current. The power (in watts) of the module is the mathematical product of the voltage (in volts) and the current (in amperes) of the module.

The structural (load carrying) member of a module can be either the top layer or the back layer. Cells must be protected from mechanical damage and moisture.

Most modules are rigid, but semi-flexible ones based on thin-film cells are also available.

A PV junction box is attached to the back of the solar panel and functions as its output interface. External connections for most photovoltaic modules use MC4 connectors to facilitate easy weatherproof connections to the rest of the some system. A USB power interface can also be used.

Module electrical connections are made in series to achieve a desired output voltage or in parallel to provide a desired current capability (amperes) of the solar panel or the PV system.

The conducting wires that take the current off the modules are sized according to the current rating and may contain silver, copper or other non-magnetic conductive transition metals.

Bypass diodes may be incorporated or used externally, in case of partial module shading, to maximize the output of module sections still illuminated.

Some special solar PV modules include concentrators in which light is focused by lenses or mirrors onto smaller cells. This enables the use of cells with a high cost per unit area (such as gallium arsenide) in a cost-effective way.

Depending on the manufacturer, traditional systems utilize 60-cell and 72-cell panels. These solar panel sizes are standard for residential and commercial installations.

What are the dimensions of a photovoltaic panel?

Residential photovoltaic size are 65 inches in length and 39 inches in width, with the depth standing between 1.5 and 2 inches.

For commercial solar panels, usually the length to be about 78 inches, while the width will be around 39 inches.

The depth for commercial panels is approximately 2 inches.

There may be variations depends on manufacturers; for example, SunPower panels measure 61.3 by 41.2 inches.

Here are the solar panel sizes for well-known of the more popular portable photovoltaic panels. Portable solar panels are go through numerous changes and new improvements, so the sizes are not perfectly standardized as residential solar panels.

Commercial and residential photovoltaic are not same. Because commercial panels are larger than residential ones, they are more efficient at producing electricity. Some of the larger homes in the US and elsewhere actually use the same types of solar power systems as commercial establishments.

96 cell solar panels are becoming common for commercial and even residential homes in the US.

Here’s a size chart for what solar panels you need by size of RV/van/camper?